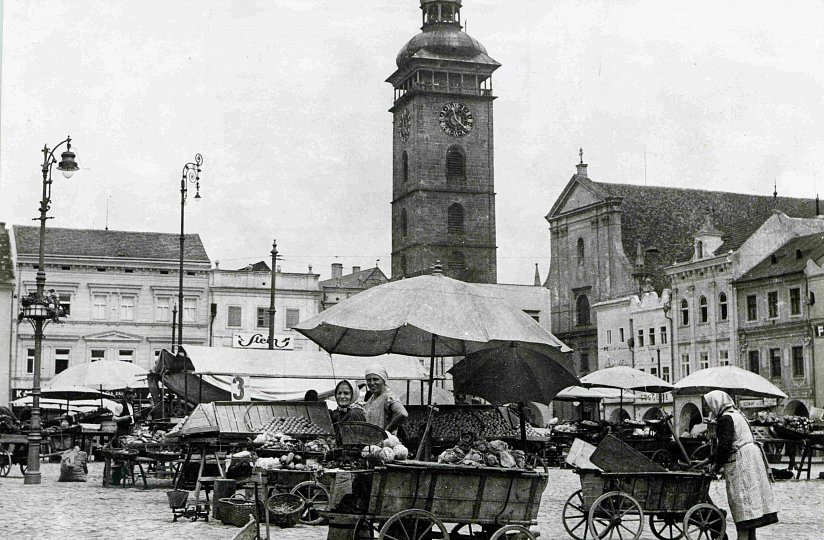 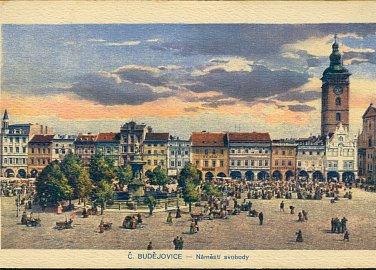 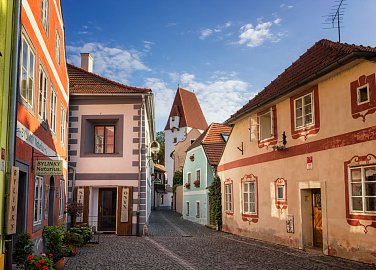 King Ottokar II of Bohemia founded the city of České Budějovice at the confluence of the Malše and Vltava rivers in 1265 České Budějovice. The ground plan of the newly developed city was brilliantly surveyed by Burgrave Hirzo of Zvíkov, with a square 133 x 137 meters flanked by a checkerboard grid of streets. Two churches and numerous townhouses were built around the square, including the city hall. The whole city was encircled with walls and fortified towers and three city gates.

Immediately after its founding, České Budějovice became a political and economic capital of South Bohemia and a mainstay of royal power. King Charles IV boosted its privileges in the 14th century, and so the city became a center of trade and crafts. Its wealth was further expanded by silver mining and minting in nearby Rudolfov.

The fortified city stood aside from the Hussite pressure and its economic upswing was only harmed blemished by the Thirty Years’ War and a large fire in the second half of the 17th century. The city renewal continued for decades in the Baroque style and changed its architectural character. A number of ecclesiastic buildings and institutions, such as the bishop’s residence, as well as secular structures were built in the city.

The industrial advances of the 19th century brought a lot of changes in transport and production. The first horse-drawn railroad car departed from České Budějovice to Linz in 1832, the very first ofits kind on the European continent. The new factories included a pencil works, an enamel works, a tobacco factory, and breweries.

The twentieth century brought far-reaching changes in all aspects of life. The city has numerous examples of modern 1920s and 1930s architecture. The population grew close to 100 thousand in the late 20th century.

The deep social and economic changes that occurred after 1989 are apparent in all spheres of social life. Due to its population, our city became one of the statutory cities of the Czech Republic, headed by the mayor. The city welcomed modern architecture in the form of both new buildings and renovations of existing ones. These included Long Bridge, the ČSOB buildings, the gasworks headquarters, the Budějovický Budvar office building and showroom, and more.

České Budějovice became the seat of the University of South Bohemia and two more colleges. Several small private theaters were established in the 1990s. The traditional South Bohemian Theater works with four ensembles, and the city is also home to the South Bohemian Philharmonic, the South Bohemian Museum and several other private museums and art galleries. Tourism, connected to growth in accommodation facilities, restaurants and other services, has risen significantly. Travel around the city is now easier thanks to new cycling trails, the new bypass road has been opened. Traffic around the train station has been relieved, and new Long Bridge connecting the older part of the city with the Čtyři Dvory housing estate has been built.

A key business for both the city’s inhabitants and visitors in many respects is the Budějovický Budvar Brewery. Other prominent businesses include the Samson Brewery, Madeta dairy works, Koh-i-Noor Hardtmuth pencil works, Gama plastics factory, and Robert Bosch and Motor Jikov machine works. There is a number of new shopping malls, including Géčko, IGY and Mercury.

With a population of 94,000, the statutory city of České Budějovice is the capital of the South Bohemian Region. Located at the confluence of the Vltava and Malše rivers surrounded by enchanting countryside, the city covers an area of 56 square kilometers.

Due to its numerous architectural and art heritage sites, the historic city center has been declared an urban heritage reserve and contains the greatest tourist sights. These include the renowned Přemysl Otakar II Square, named after the city’s medieval founder. From a bird’s eye view, the nearly regular square shape is surprising with a surrounding perpendicular grid of streets.

The dominant building among the Baroque and Renaissance buildings with arcades around the square is the Baroque town hall. The four stone statues set among the three city hall spires are an allegory of the civic virtues: Justice, Bravery, Wisdom and Caution.

The gem at the center of the square is the Baroque Samson Fountain, the largest of its kind in Bohemia, featuring a sculpture of the legendary hero Samson fighting the lion.

The city center of České Budějovice is dominated by the Black Tower – a 72-meter belfry and city watchtower. Its gallery provides a stunning view of České Budějovice and the surrounding area. The tower was built in the Renaissance style by councilors in the 16th century. To the right of the tower is the Cathedral of St. Nicholas. The austere Baroque structure was built in the mid-17th century after the beautiful Late Gothic cathedral was destroyed by a fire. The list of sights is much longer: the Dominican monastery with the Church of the Presentation of the Blessed Virgin Mary, the Salt Store, remnants of fortifications, the Rabenstein Tower, and the Iron Maiden…

Every year, České Budějovice becomes a vibrant center of culture, particularly in summer and during Advent. Countless unique performances during music and theater festivals, in which the historic city center with its squares, streets, parks and water surfaces double as the stages, have attracted visitors from the country and abroad.

The city has had a new attraction since 2011: boat cruises on the Vltava via Hluboká nad Vltavou to Týn nad Vltavou. You can cruise on a large boat or a small motorboat, which you can drive yourself. Since 2017, cruises with guided tours on the blind channel of the Malše in the city center have been added.

The city’s advantageous location at the center of the region and the great number of marked hiking and cycling routes make it possible to explore attractive cultural and natural sites in the surroundings. Located nearby is Neo-Gothic Hluboká Castle with rich collections of art in its interiors, and the Renaissance spa town of Třeboň. The sites included on the UNESCO World Heritage List are definitely worth a visit: Holašovice with its vernacular Baroque architecture, and the historic gem of Český Krumlov. Nature lovers will appreciate the Blanský Les hills with the highest point Kleť, the Třeboň fishpond district and the Novohradské Mountains.

České Budějovice is a friendly and hospitable city. Come find out for yourselves!

České Budějovice is situated in a flat area, which is why its inhabitants like bicycling around the city. The cycling routes are marked with capital Latin letters A–L.